I feel like many people who utilize Pinterest and other platforms to get inspiration for recipes there will never truly be enough days to have time to make them all. As someone who also appreciates fitness and living a healthy lifestyle, it can also be hard to find a way to balance the competing ideas.

Years ago, I tried paleo. There were things I liked: bacon, learning that food is fuel, flexibility with healthy fats. There were also things I didn’t like: no peanut butter, no grains, expensive (at least for me).

I bought a few books and cookbooks so I didn’t dive in blindly. I picked up a few books that were targeted for kids because I figured that would be a good place to start. I also got a fancy paleo dessert book and sadly I haven’t made anything from it – some of the ingredients aren’t your everyday ingredient and I need to order them. It’s an investment for some of them as well. I followed a few blogs and observed how people adapted. I’ve been following PaleOMG for about six years now and it seems like it was so much longer ago than it was.

When I found her she was much more strict with paleo, but she calls herself paleo-ish, which is something that I appreciate because I love food and while I did try this style of eating years ago – I’ve learn that nutritional protocols that call for unnecessarily elimination don’t do me any good.

Anyway, I love her recipes and have dabbled with a few. I’ve kept some paleo and I’ve changed up some ingredients. Like, are you really a foodie or cook if you don’t fuck around with the recipe?

But what really inspired me to make this recipe is the CrossFit Games. CrossFit leaves me torn.

I’m not sure I like the idea of doing a WOD. There’s a time and place for being told what to do and with the program I just completed I felt I was able to make some changes if energy or mindset wasn’t where I thought it should be.

I do however, love some of the lifts and the fire in these athletes. Like, some of these women are just bust deadlifts three times their bodyweight. THAT’S NUTS.

So while I don’t want to start CrossFit I do following a few YouTubers and blogs of those who do CrossFit as well as powerlifters. It’s just a different kind of mindset towards working out and raising the bar on what you’re capabilities.

Want to be mind blown? Google some of these names:

One of the I was watching followed around Mat Fraser – he’s the “fittest man on Earth” – two years in a row. He’s competing this year again in the CrossFit games with the hopes to take the title again. His girlfriend, Sammy, cooks for him and in the video they captured footage of her cooking and taking photos of the food. They showed her cooking Instagram, which is public, called Feeding The Frasers. This led me to the Facebook page by the same name where she reshares those photos of food and recipes.

She gave me the push for the zucchini bread. She took PaleOMG’s recipe and made a change – almond flour instead of coconut flour.

I made two changes – peanut butter instead of sunflower butter and decreased honey.

*Original recipe called for sunflower butter, peanut butter has a similar consistency. Just be mindful that almond butter may bake a bit different because of the consistency.

*I used less honey because while I do love my sweets, I always try to see if I can get away with decreasing sugar content. I thought it was perfectly sweet with a little less honey.

*The original recipe called for coconut flour. I used almond meal and found that between 2 and 3 tablespoons was enough since almond meal/flour absorbs liquid differently that coconut flour.

2.Peel and shred zucchini into a bowl covered with a cheesecloth. Gather up the cheesecloth and tightly twist it closed. You want to squeeze as much water out as possible. In the original recipe, she used paper towels, however, I find cheesecloth to be a lot easier to work with and you get less waste. 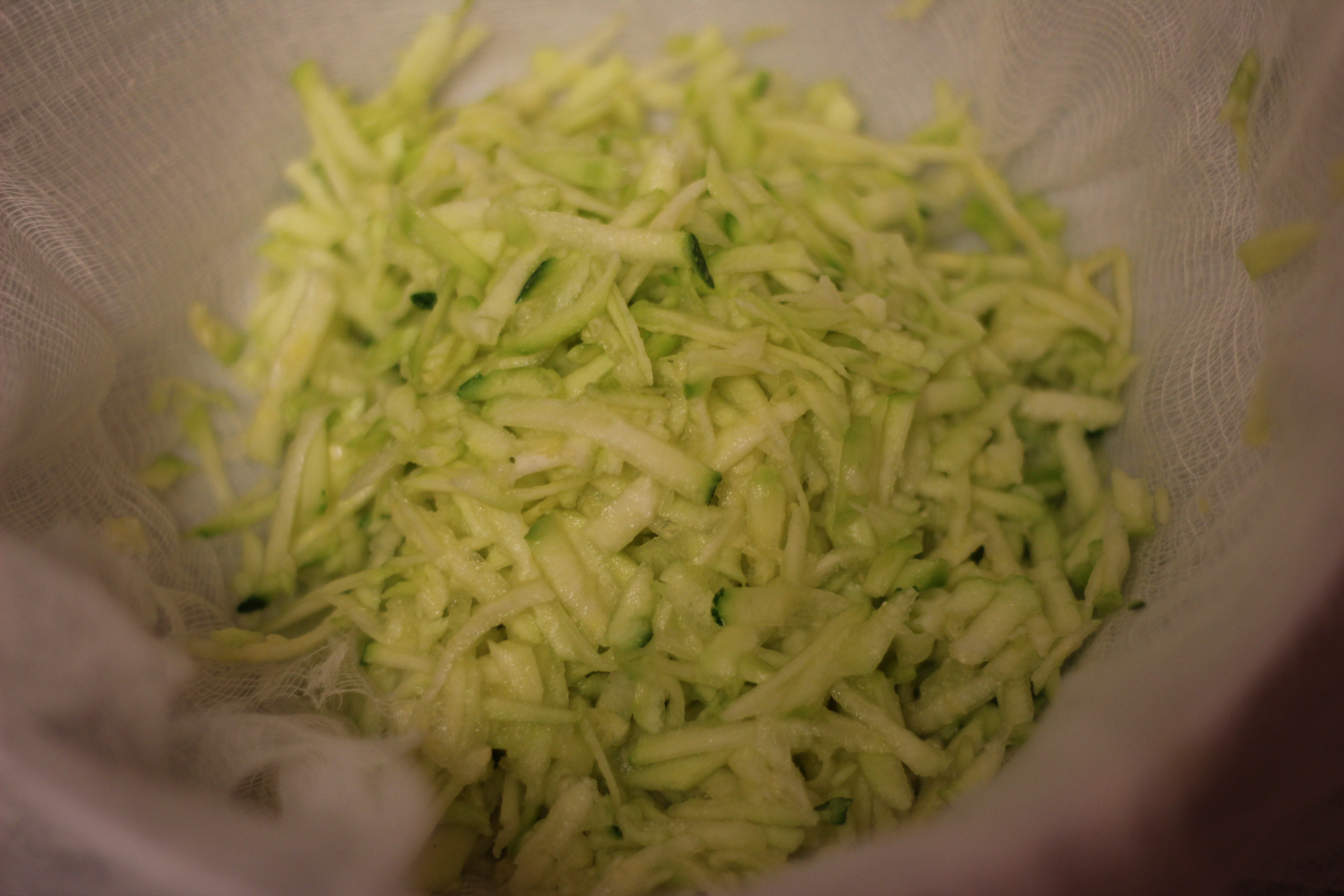 3. Once you’ve drained as much water out as possible, discard liquid and pour shredded zucchini back into the bowl.

4. Add all other ingredients to the bowl and mix well. 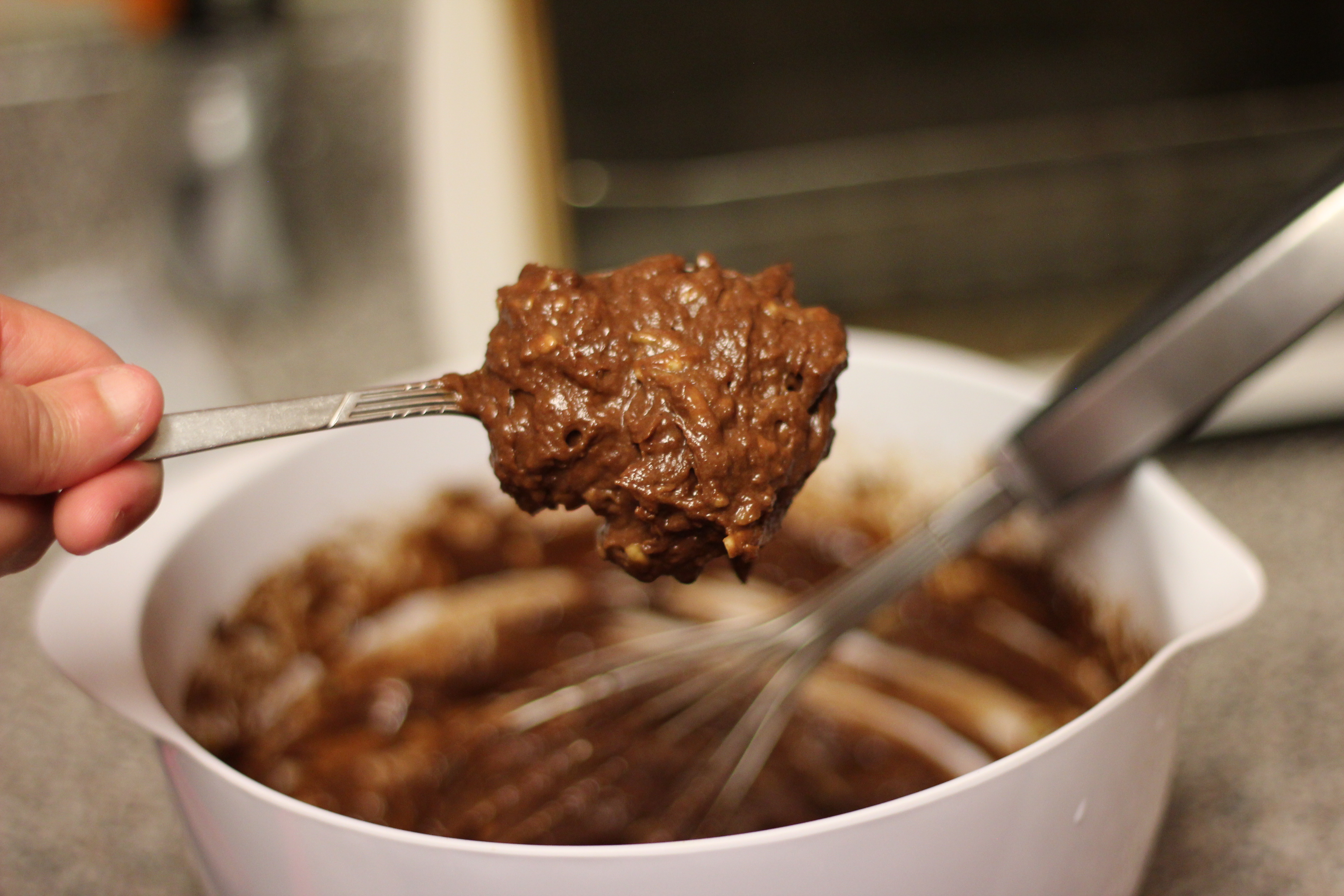 5. Place a large piece of parchment in a standard bread pan. I prefer this because the bread is going to be moist and can be hard to get out of the pan without falling apart.

6. Pour batter into pan and bake. Keep an eye on your oven. The original recipe said to bake it for between 20-25 minutes, so I set a timer for 20 minutes to check on it. I set two additional 5 minute timers and took it out at 30 minutes.

7. Remove from baking pan and place on cooling rack. After a few minutes peel parchment paper down from the bread loaf. 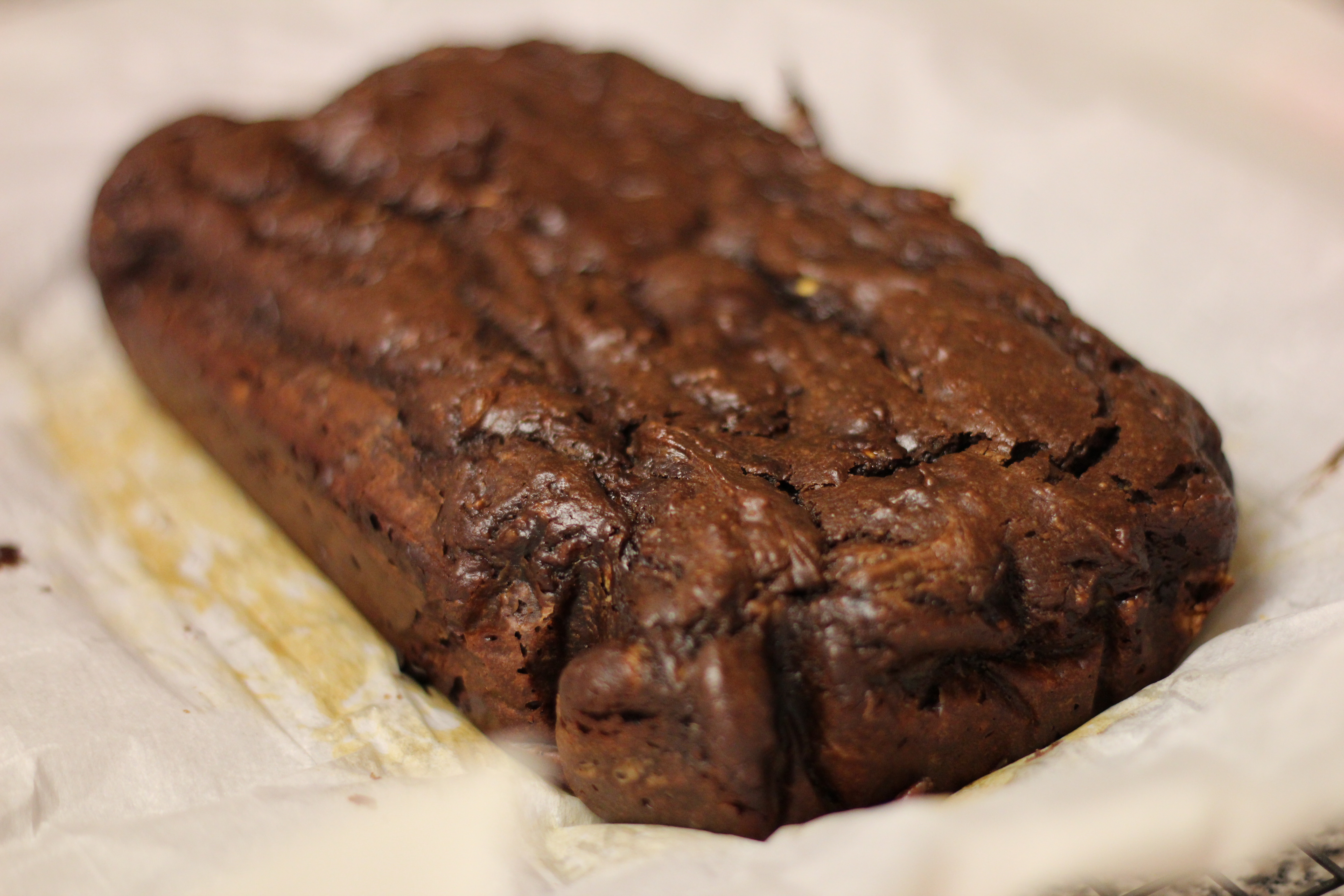 This was super easy to make and was ridiculously moist – which is why I think I had a hard time determine how cooked with was. It may have been able to be in a for a few minutes less, but rather safe than sorry because the top still jiggled a bit at the 20 minute mark. The peanut butter flavor was pretty strong, so I’d be interested to see how another nut butter is in it and see if the chocolate could shine through more.

This recipe is naturally gluten-free, but I would check some of the ingredients (like cocoa because you never know).