No one is immune.

There are some things we just don’t grow out of, no matter how much we want to or how hard we try.

For some, it may be hard to look in the mirror and see the person standing in front of them instead of the person they used to be. For others, it may be how they think about their environment or how they respond to it. These may be things that we work on piece-by-piece by never fully let go.

I’m sure you’re noticing a pattern by now with how I talk with my clients and try to talk to myself. So I have no issues saying again, this is something I talk to my clients about often because this is also something I tell myself.

Behavior change is hard. I’ve talked about that before. You need to be ready for it. That being said, once you’ve felt good about making changes and you’ve practiced them, it can STILL be hard. Our behavior is a result of many things, it’s more than we “know”.

There’s two conversations going on in my head and I apologize if they get a bit jumbled, but they intertwine.

I took medical leave almost two years ago because of my PTSD, and while I had been diagnosed four years before, I had never struggled with flashbacks, anxiety attacks and disassociation as intensely as I did when I started medical leave.

I know now that the behaviors I had that led to my weight gain were also related to my mental health. Honestly, as a college student, that wasn’t something I had considered before.

Seven months after college, I started to lose weight because I felt like I couldn’t control anything around me and this was something I knew was about my behavior. After I started losing weight, I had struggled with my eating in spurts around times of high stress, sometimes for a few days at a time, but never for longer than that. I never thought of this as more than stress-eating.

It was weird when my therapist at the time said I had binge-eating disorder. Our sessions revolved around growing up in an abusive household and how it impacted me in the present day. We talked about my relationships and the life I was creating for myself and making connections with previous experience and behavior to current experiences and behaviors. It was weird when a second therapist also agreed that I had an eating-disorder.

When I’m in good headspace, I don’t struggle with eating or decision-making or sticking to whatever “plan” I have at the time – that goes for sleep schedule, workouts, as well as eating – all aspects.

The second is telling you that I do feel good about where I’m at with everything. It’s been a weird year schedule wise, but I feel like I’ve gotten a good handle on adjusting priorities and creating a lifestyle that works for the current time.

Some of the feelings I’m going to talk about came to a surprise to me because I’m not 100% sure where they came from.

I’m also sure some things I will say may sound like they’re contradictory.

Let’s start at the beginning-ish.

In the beginning, when there were dinosaurs and I felt like change and progress were going to take forever – portion control meant eating smaller portions than what I had been, i.e. putting less on my plate and therefore in my mouth. This meaning was easy to follow because my daily diet was out-of-control and it wasn’t hard to just decrease my portions.

When I was competing, the above concept of portion control was a bit more meticulous. While I still chose to have one or two servings, I was more precise with my measurements.

So, I repeat – when I’m in good headspace – adherence isn’t hard for me. I’m deadline driven. I thrive in a goal-oriented environment. In isolation, the weight loss portion of my journey wasn’t hard because I had no issues sticking to smaller portions and moderating my food or working out – it was everything else in my environment that made it hard.

Today, even though I’m focusing on developing my strength and body re-composition, I’m allowing some flexibility with my eating, which means it might not be so perfect. Real life isn’t perfect. For me, I need to be flexible – I want to be flexible, otherwise, I think we find ourselves upset in every situation that we believe we have no say in or is out of our control.

I don’t have off-limit foods. I truly try to be flexible within macro-counting. I don’t eat foods I don’t like. I also try to change up my meals and be creative because you can’t live your life on a meal plan. When I’m not tracking everything, I have an 70/30 or 60/40 rule – track most things, but work on making good choices.

When JP and I go out to eat, I always get something I won’t cook for myself at home – like fish. I just can’t cook it the way they do at the restaurant. I’ll also get something slightly ridiculous like a burger with every topping on it because it’s not something I would do regularly anyway.

When we get dessert to bring home from local bakeries, my thought process is usually these will be here tomorrow and the next day and the next, so picking up the number we want is enough for now. We usually pick up two (depending on the size) and we split them. I pick one and JP will pick one. We don’t usually bring home more than we’re going to eat that day.

However, sometimes, when I’m trying to decide about something we don’t have often, I do struggle to finalize my choice. I may change my choice three or four times. I may say it out loud and talk to JP about it. Sometimes I go back to my first choice because there’s a reason I said it first, even if I don’t know it.

This is struggle I found myself in Sunday morning when we went to get bagels.

We always have bread in the house. Bread isn’t special. We make sandwiches a few times a week with whole grain bread and it’s satisfying enough – fiber, vitamins, all the things a grain should provide.

We always have English muffins in the house too. We probably eat them twice a week and since we don’t buy burger buns, sometimes we use plain English muffins in place of those. If you’re making a face at that, you don’t know the magic of a toasted English muffin and how it holds your burger patty and toppings in place!

We don’t keep bagels in the house. I’m not really sure why, but it’s probably because the size of the English muffin is enough to satisfy the craving and provide fullness without being too full. Sometimes a bagel can be too much.

There’s a bagel place by JP’s parent’s house called Gunther Tootie’s. The name always makes me giggle and their bagels fill me up for hours. I usually get a breakfast sandwich and that accounts for breakfast and a snack because it really is that filling for me.

The conversation I usually have with myself and even with JP when he’s deciding is – sweet or savory? What am I trying to satisfy because let’s face it – this is about taste. From there I’ll ask what stands out that sounds good and what will keep you satisfied. I do ask myself about satisfaction in relation to fullness because I don’t like to be hungry after I’ve eaten a meal that I believe should’ve kept me full. I also ask about satisfaction in relation to taste because 1. I should like the taste 2. Food is also about experience. Everything has its place: fuel, experience, nutrients.

Yesterday morning I knew I wanted a bagel, obviously. I figured I would probably get a bagel sandwich, but I couldn’t decide between sweet and savory. My first choice was a bagel with salmon because we NEVER buy salmon. I then went down the rabbit hole of should I get this, or should I get a bacon, egg and cheese, maybe I should get a chocolate chip bagel and honey walnut cream cheese. 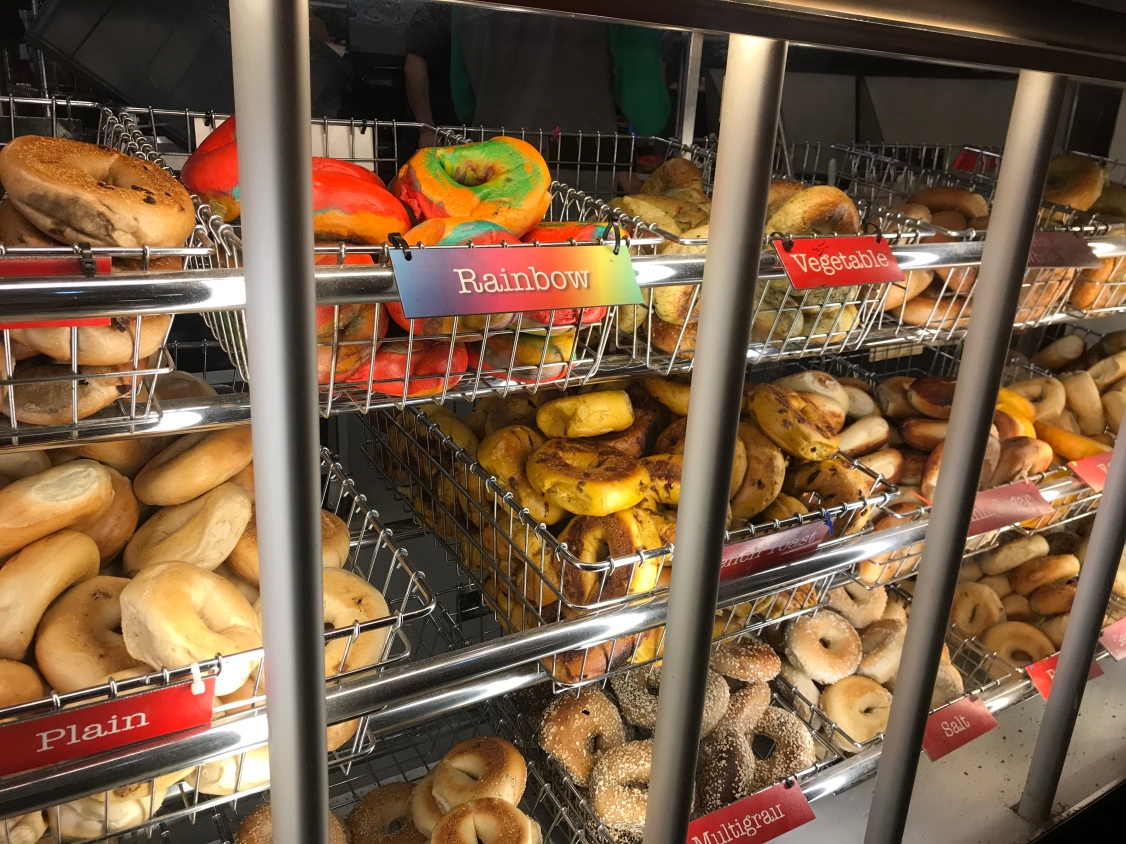 In my head, I probably went through five or six choices and then said to JP, “I think I’m going to get salmon on a rainbow bagel, and I’d like to bring home two bagels for us to have for breakfast this week.”

He looked at me and said “yeah, we could do that.”

So, I ordered a rainbow bagel with salmon, regular cream cheese, red onion and tomato to eat right then and a chocolate chip bagel and an onion bagel for later this week. They’re already planned for breakfast on Tuesday. 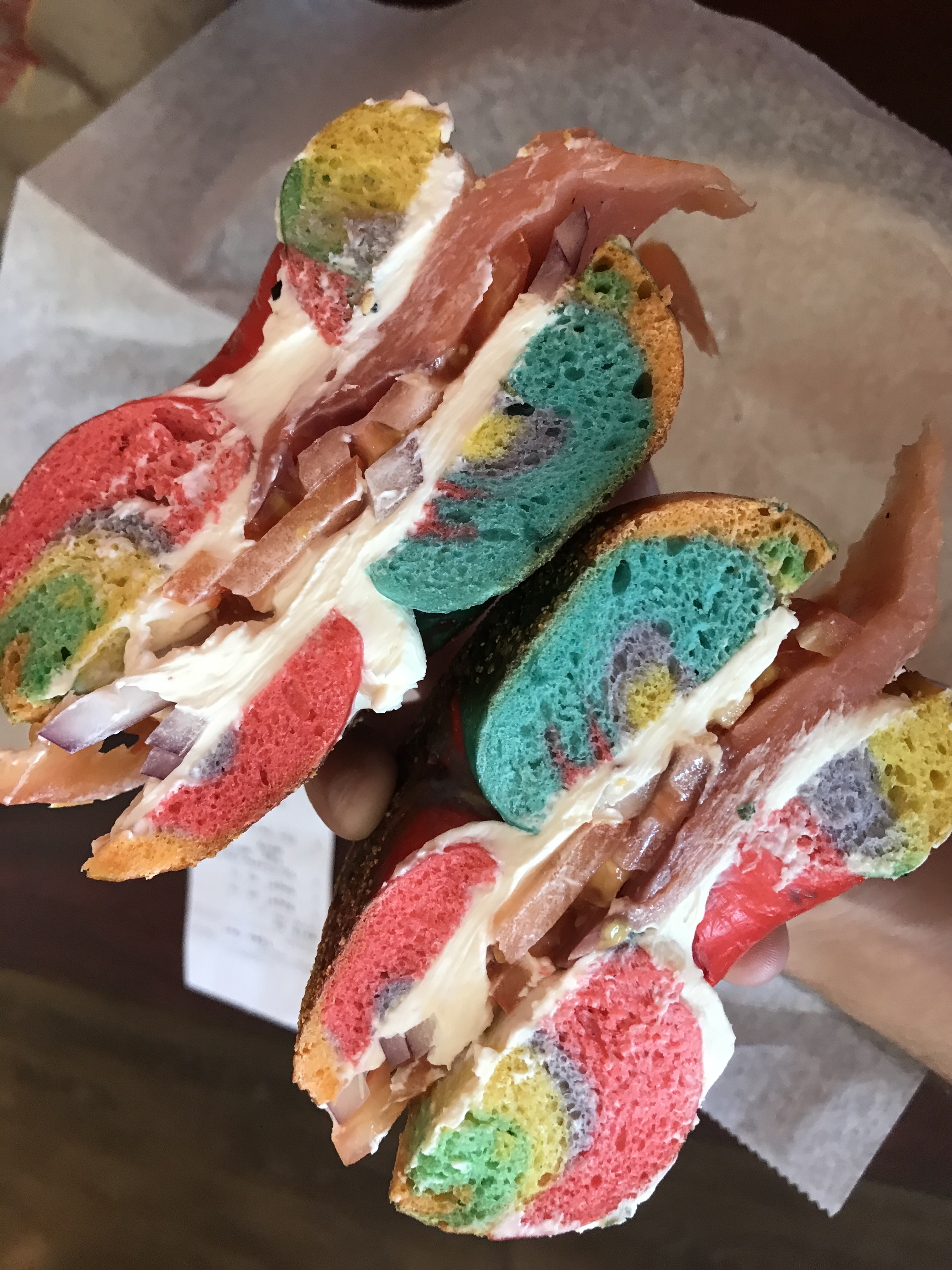 This was the compromise for the battle in my head.

I know it’s one that many others face too.

Here’s what I know about this battle.

These are two of the most important questions I ask clients – who or what is in your environment and what are these relationships like?

These are also questions I ask and reevaluate in my own journey.

Who or what is in my environment and what is the impact they are having on me.

Right now, so many exciting things are happening, and I never thought I would get here. It’s overwhelming. It’s a good overwhelming, but with the excitement comes fear and doubt of something new. I don’t always feel it, but sometimes it creeps in.  Sometimes it puts pressure on the other relationships I have.

For me acknowledging the feeling in general is a good step. Talking about how it’s impacting other aspects of my life is another.

My relationship with food isn’t perfect, but it’s better than it used to be, it’s a work-in-progress.

Trusting myself is going to be an ongoing project and that’s okay.

Great relationships take work and time. I’m not in a rush.

*If you think you may be struggling with an eating disorder or disordered behavior patterns, please seek proper professional assistance. The National Eating Disorders Association has a helpline that’s open 24-hours a day. If you don’t think your behavior warrants that call, consider reaching out to a therapist in your area who can assist your specific needs.