runsweateatrepeatPosted in Running on Quotes

We’re shifting. I’ve been running on movie quotes this year and JP and I have been watching A LOT of movies. The spring was tough and there were more date night’s in,s o we revisited some of our favorites and found some new ones. Some inspired me and struck something that made me want to write.

But I’ve been working on writing more in a different way. Not just blogging or the workbook, but journaling and writing just to write. My friend Kara started a writing group for about a dozen of us using a writing challenge that prompts us daily. The prompts may be quotes, it may be a photo, but regardless you’re encouraged to write what comes to mind that day.

There have been some where I knew exactly what I wanted to get out of my head on paper and others that frustrated me and left me pondering for most of the day.

My first thought was self-demeaning.

I am not brave.

I then thought of all the times that I’ve been told I’m brave.

I reached out to Kara and said in not as many words, this post was something I wanted to expand on outside of the group. I asked her to co-write a blog post with our view points of bravery.

As you read through our perspectives, I want you to ask yourself what brave means to you now. Has it ever changed it’s meaning? Do you think it can continue to evolve for you?

I also want you to consider its Google definition – you know, when you search Google like this: def:bravery. 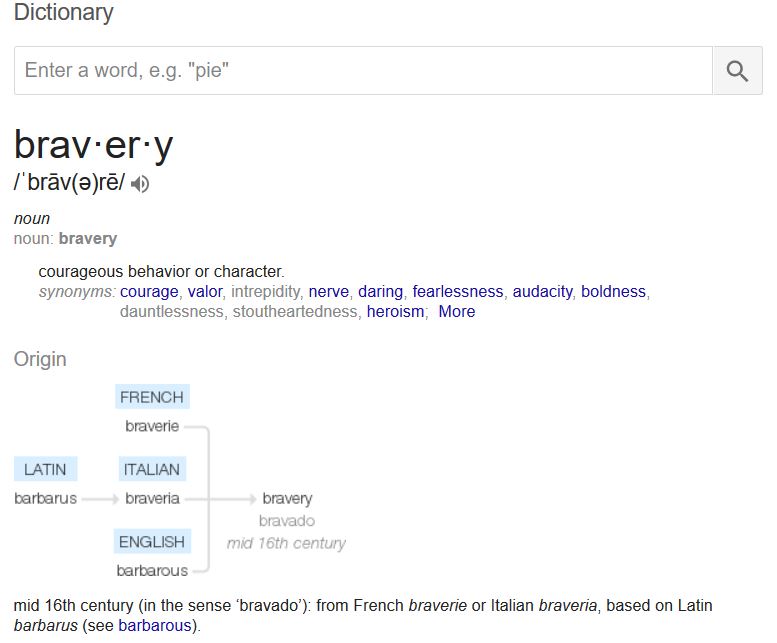 Moments of bravery go unnoticed every day, while moments of pride and vanity are heralded as heroism.  Because bravery means something different to each individual, because we all have our own fears – both acknowledged and hidden – bravery takes many forms.

The definition of bravery that resonates the most with me is from Merriam-Webster’s latest edition, “Having or showing mental or moral strength to face danger, fear, or difficulty”.

Is it brave to commit yourself to defending your country?

Is it brave to put your life in danger to save the life of another?

It’s also brave to get out of bed in the morning when every part of you hurts, and you just don’t think you can do it.

It’s brave to try something new that takes you out of your comfort zone, knowing failure is the likely outcome.

It’s brave to find the lesson in the failure and try again, over and over.

It’s brave to speak up and share your truth when you know your perspective is different.

It is brave to form your own path, often walking away from what is comfortable, expected, and accepted.

In the last year, I have been called brave more than perhaps any other time in my life.  Due to a series of localized tragedies that the CDC has deemed a “suicide contagion,” I decided to share my story.

I spoke to my high school classes, and eventually to the entire student body, about being a survivor of multiple suicide attempts.

I have always been open about my experiences with mental illness, both in person and on social media.  Hiding who I am and how I am struggling is something that I decided long ago that I would not do. Pretending that they don’t affect me every minute of every day isn’t helping anyone.

During moments of openness about mental illness, I have often been told how brave I am to share my struggles. To me, this isn’t brave. This is just being who I am and not being ashamed.

I share my experiences because I hope to find connection with others, along with understanding. I do not want pity, but I do want others who may be fighting their own battles silently to know that they are not alone.

Ironically, the moments in my life when I have felt the most brave probably wouldn’t be what most consider brave actions. It was the moment that I stepped away from a relationship that on the surface looked perfect, but underneath was damaging.  Or the first time that I put myself first, rather than fulfilling my lifelong role as a people pleaser. It was finding genuine happiness for a friend at her baby shower, days after I had miscarried. It was willingly putting myself into a situation that I knew would induce panic, because I know it’s part of the process of healing.

I hate the word brave.

I think that many people view behaviors that they wouldn’t exemplify as brave. They wouldn’t wear stripes or talk about mental health – so it must be brave. For me, I know it has nothing to do with things I wouldn’t do.

I think it has to do with things that leave me in awe.

I saw brave when a friend told me she went back to therapy. She’s capable of problem-solving and she’s capable of making connections and then making a plan, but I also believe that this assistance will guide her to peak greatness. I believe that she will be able to grow more fully and asking for help and putting trust in someone else is brave.

I saw brave when a client told me she was leaving her corporate job to be a stay-at-home mom and teach her sons herself. This was a powerful declaration of “I can” from this client and my heart clapped and cheered for her because while I knew she was terrified inside, she was still taking this step.

I have felt brave when getting out of the shower on days I thought I couldn’t get out of bed. Sometimes I stay in the shower longer because I’m thinking and when I’ve come to my conclusion I’ll feel ready to step and out go into the world. But on days when it’s bad, getting in to begin with is a project and the feeling of readiness to take on the world (as it feels) seems like a burden.

I have felt brave when I trust myself to be capable in the gym, as a coach, as a partner. I have more doubt than I want to admit, but writing it out makes me face it and makes me think about where it comes from.

I feel brave when being myself. Growing up, if I was bullied my dad always asked what I did wrong or what I did to draw the bully’s attention. It was never about the wrongness in their behavior but identifying that there must be something wrong with mine. I am not wrong and it took a long time to see that and to feel that.

When I was a kid, I think I just wanted to be happy. As an adult there has never been a point in my life where I have thought, I want to martyr for the cause.

I don’t want to be brave.

I just want people to look at me and see normal people can do extraordinary things when they work hard. That normal people change the world. That we can live our lives to the fullest without labels of our accomplishments.