You Are Enough Blog Series: Post 1 “It’s Time to Rediscover”

This is the start of something new.

Not just because this is a new blog series, but because this the start of the next six weeks. About a month ago, a series of triggers set off the bomb in my brain that caused my roller coaster to stop climbing to the top, but immediately drop at record pace. Since then, I haven’t had an opportunity to “calm down” as many of you call it. I have been repeatedly triggered for a month, and as friend told me “this seems to have been going on for a long time.” Well yes, it has. A month is a long time, but it’s not uncommon.

For the next six weeks let’s call this what it is. Post-Traumatic Stress Disorder (PTSD). Mental Illness. Classic Conditioning. Dissociation.

I want to be clear: mental health contributes to physical health.

Let’s go over some definitions and facts because we’re not doctors or psychologists – while I am taking a course and have a better idea of my own disorder, I am not an expert.

PTSD manifests differently in every person that has it. It’s associated with military personnel the most, but they aren’t the only individuals who suffer from it – they’re just talked about the most. My PTSD is from childhood trauma – see this post for more of my history. PTSD can be caused by “experienced or witnessed a natural disaster, serious accident, terrorist incident, sudden death of a loved one, war, violent personal assault such as rape, or other life-threatening events,” according to the Anxiety and Depression Association of America.

PTSD often occurs with depression, substance abuse or other anxiety disorders. I’ve talked about my history with binging and what triggers me to do it. I’ve talked about how events trigger me, not the concept of restricting that occurs in competition cycle.

Someone recently asked me about perfectionism in relation to binging. She suggested that her own binging is triggered by her desire to be perfect and she acknowledged that she self-sabotages herself when she believes herself to not be perfect. My response to this was “My PTSD has nothing [to do] with fitness or nutrition and being perfect. My triggers have nothing to do with that at all.” The perception that my nutrition and fitness regimen is perfect is because that’s my coping mechanism.

Triggers are out of your control. Something in the “back of your head” reacts to an external stimulus – if we’re going to get all science-y for a hot minute. My daily activity isn’t about being perfect, but working on what I can control. That’s how this journey started. Too many things that were out of my control were happening and I felt helpless. Focusing on my physical health was in my control and it made me feel as though something was right in the world. I don’t have OCD, but excelling in this way can be a characteristic of coping with PTSD.

It’s been a month since I have felt a consent sense of self or world right-ness.

Specifically, in the past week I believe my lows and highs are very vast and have impacted how JP and I interact with each other. It is to the point that he stops asking what is wrong because the last time he did, I told him I didn’t know what he wanted me to say. If he’s asking that something is wrong, then something, somewhere is wrong, so please stop asking. We had a drastic change of plans the other day because I got back in bed after being triggered during a phone call conversation and couldn’t leave bed for a handful of hours. When I did get up, the only decision I felt capable of making was to take a shower. I have been having stomach and chest pains almost daily. I’ve been having flashbacks, issues interacting with people around me and dissociation.

This is what can manifest in some people, not everyone will present the same characteristics.

For the past three weeks, I’ve been working on a plan so I can finally feel like I’ve leveled out. I’ve been thinking so hard about this. Because again, making a big decision is hard when you don’t feel like your mindset is completely there.

For the next six weeks I’m taking a break from work and focusing on my mental health and physical health. I’m not getting into the details, but if you want to learn about this because I’m sure a lot of you have jaws on your keyboard or cell phones, click here and here.

For the next six weeks, I’ll be focusing on finding other mechanisms to cope so that I’m less likely to shut down like I have the past few weeks. This isn’t about sitting around, I will be working on resting and getting my energy back, but this is about navigating my triggers and finding balance. Rediscovering my center, if we want to get all hippie dippie. My therapist and I will be working together a lot. It’s going to be just about taking a day trip because I have time. It’ll be analyzing events and behaviors.

It took a lot of thinking and this was a big decision to make. I can’t remember the last I felt I had a break. The last time I felt like I had time. I don’t even know what I’m going to do with the time I have that I’m not working with my therapist, but I guess that’s part of it.

I’ve been wanting to feel like myself and today, I cried. Today is the first day of leave and the first day I get to say “I’m going to take it slow.”

This series is called “You Are Enough” because that’s all people have been telling me the past month, the past week.I’ve been asking myself did I take a wrong turn, could I have done something differently, and the truth is I don’t even know what I would do differently if at all. We can’t control everything, but we can learn to understand why and how we reaction to different situations. 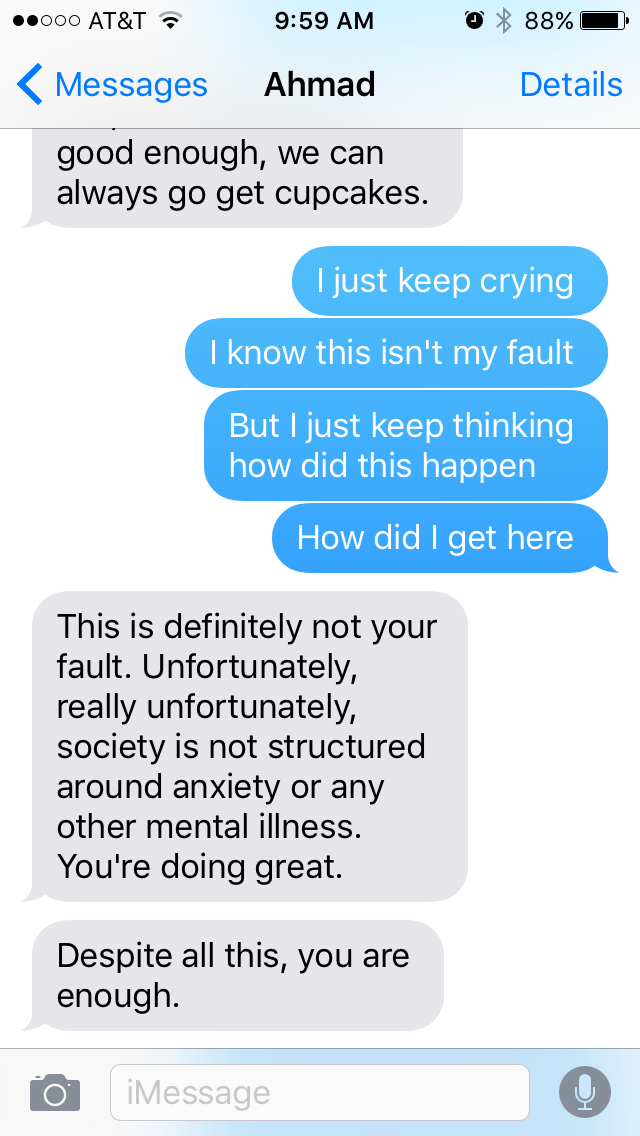 5 thoughts on “You Are Enough Blog Series: Post 1 “It’s Time to Rediscover””